Except for the lattice outer skin, the wing construction is conventional with plywood ribs.  A lattice of spruce strips carries drag and antidrag loads, torsion loads, and gives the wing shape. The main ribs are 32″ apart.  The ribs for the entire airplane can be cut out in a day. Before the lattice is applied, the wing is built similar to one that would be plywood covered, or even an aluminum wing before skinning.  The lattice is stiffer, lighter and less expensive than plywood would be, if you cut your own strips.  The drawings clearly depict the lattice application.

Though the wing appears to have a lot of pieces, construction is straight forward, and not difficult.  The end result of this type of wing construction is a wing with great torsional stiffness, allowing the use of only one lift strut, and a very accurate airfoil contour which contributes much to “Cygnet’s” performance. 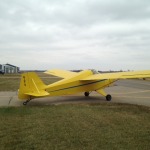 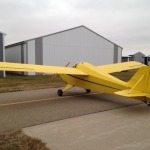 The fuselage is a standard chrommoly steel tube truss structure. In spite of all the “chit chat” one way or the other, this remains one of the best fuselage structures for a light airplane.  You do need to be able to weld. Many homebuilders have taken night school courses in welding and built their own airplanes!

Personally, I like to build the fuselage first.  Over and over I have built fuselages with 50 hours’ work.  No fittings, no extras, but the basic fuselage truss.  In 50 hours of work, you can declare yourself to your family, friends and neighborhood that you are a bona fide, real airplane builder!  It’s really great for the ego!  From there on…….things do go so fast, but you have declared yourself and you are on your way!

The landing gear uses a common tri-pod mounting system, bungee spring, similar to the T-Craft, several popular models, the Aeronca Sedan, Pitts and many others.  It’s used a lot because it’s good!  Though a little more work to “fair” underneath…….it’s very light for its required strength, is low drag, and has a solid feel on the ground.  Except for axle threads, it can be made with a hacksaw, a file and a torch.  Although our airplane has 5.00 wheels, 6.00 can easily be put on a slightly larger axle for even better performance.  The gear is stout and can easily handle skis.

Another opinion is the 18-850 X8 low pressure Tundra Tire that will allow Cygnet to land on soft sand or very rough terrain.  Floats may also be fitted,

The tail sections are conventional steel tube construction.  One minor variation is the streamlined steel tube stabilizer brace.  During the construction of an amateur built plane, the tail is installed and removed a number of times checking fits, hinge operation, cable runs, etc.  Much time is saved with a “bolt on” strut instead of four to eight adjustable wires to perform the same task.  There is not much difference in drag.  A large effective trim tab is provided.  It is a great convenience in flight to be able to trim out control stick forces rather than holding the stick 100% of the time.

Each control axis has a backup.  The airplane can be turned with either ailerons or rudder alone, and pitch control is available with the stick or the response trim tab.